I write in hopes that someone, somewhere will relate and gain comfort in knowing they are not alone and every time I share a post my mentality remains the same. Perhaps others will be able to catch these symptoms early, should they present themselves. Please be sensitive in commenting on this post. Whilst I welcome feedback and constructive criticism, this post is sensitive to me and my experience.

Diabetes is often described as an 'invisible illness' but sometimes it is more visible than we would like to admit. In my instance, this was brought on by the combination of excessive vomiting and dehydration caused by the combination of a UTI and viral vertigo and the diabetic ketoacidosis that followed after my body had gone through so much. 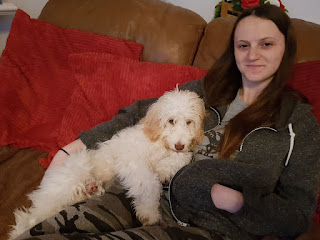 I was ill for a fortnight leading up to my admission. I have never felt so unwell and I just knew it was something sinister. Since I had no other symptoms other than feeling generally very unwell my GP shrugged me off. My blood sugars were on the low side and my ketones were low.. (average of 0.2). Above is a photo the day before I was taken into hospital. You can see that something isn't quite right just by my complexion, thinning face, dry lips and sunken eyes. How nobody knew is beyond me.

I was diagnosed with a UTI on my second visit to the GP and given antibiotics to treat. It wasn't until the following morning that I woke with viral vertigo and began vomiting which sent both my blood glucose levels and ketones sky high, that I was taken seriously and my health was deemed 'at risk'.

It wasn't just the feeling of being unwell but the physical changes in my appearance that really alerted me. For someone who had lived with diabetes for 15 years having had no experience of diabetic ketoacidosis, I guess I was naive to think it would simply be blood sugar and ketone related.
My appearance and body changed completely within the fortnight leading up to my admission date.

Since posting my 'DKA experience' blog I have had lots of questions about how the DKA slowly crept up on me. Here is a list of symptoms that I experienced which surprised me most. In writing, it all seems so obvious but I have written this list in hopes that others will be able to catch these symptoms early before the life threatening state of DKA arises.

- Sunken Eyes
This sounds really obvious that this would concern you but trust me, when it happens to you, you blame every other possible explanation. I was convinced my hay fever had reached an all time high. My eyes were completely sunken into the back of my head with dark circles under them. The complexion of my skin was dark and dull. I was very pale and my lips were dry and colourless.

- Shallowed Breathing
Again, sounds like an obvious one but I did not noticed how shallow my breathing was until I was alone in a quiet room, which when you think about it, doesn't happen very often. I did notice that when I tried to normalise my breathing, I become incredibly out of breath very quickly.

- Restlessness
For a generally calm individual, I had difficulty sleeping and could not stand still.

- Fruity Breath
Having high ketone levels often causes bad breath. One of the ketones, acetone causes your breath to smell like nail polish. No matter how many times I brushed my teeth I could still smell it.

- Lethargy
All I could do was sleep. I had zero energy and it felt like everything was in slow motion. Every movement was heavy and exhausting and took all of my might. I think my body was so focused on keeping me alive that any other movement was secondary.

- Relentless Headache
I can remember my head just pounded and pounded every minute of every day. Paracetamol was not touching the sides. In the last few days it presented as more of a migraine. Certainly when I fell into DKA it caused major discomfort.

- Physical Strength
My muscles were so incredibly weak, by this I mean I could hold up my arm and see it physically shake. I would wake in the morning and struggle so much to hold my own weight that it would make me feel nauseous. I struggled to walk and when I did finally leave hospital it was in a wheelchair. Although to be honest I was just so happy that I was leaving I couldn't care how!

- Appetite and Weight Loss
I was so focused on just how I was going to take my next breath that I don't really remember eating much. My clothes began to hang off my body. I lost a stone whilst in hospital. I did not feel like I could eat when in hospital as I was so terrified of vomiting again incase it would set off my ketones and I would have to live it all over again that I didn't eat. Plus, I had been pumped with so many fluids my appetite had completely disappeared. This took a long time to regain.

- Slurred Speech
I was sent home from work because a member of staff noticed that my speech was slurred. I was pulled aside and was described as speaking 'gobildy goop'. To be honest, it was at that point that I began to really question what was happening to my body and I suddenly realised I was not safe to be alone.

- Confusion
Physically, I could have been anywhere. My alertness decreased rapidly as I had no recollection of where I was, what I was doing or how I got there. I was completely out of it.

Honestly, these images show just a fraction of the symptoms listed above but you can see many of the symptoms that I have described. They are hard for me and no doubt, you as a reader, to look at but you can clearly see that something was very very wrong. It is so easy to look back in retrospect and I am thankful I can do that.

My intention is not to scare anyone with this post. I have lived with type one diabetes for 15 years with no experience of DKA but please, if you look physically unwell or notice changes within yourself or your child PLEASE persist. Continue to ask health care professionals like a ping pong ball and visit a different doctor every day if you have to until someone gets to the bottom of it.
If someone in your world suddenly changes or looks unwell, please do not try to spare their feelings by not telling them- it could save a life. I am lucky that thanks to my family, friends and health care professionals working together that I can go on with my life but others have not been and will not be so fortunate.
Posted by Diabetesgeek